Host Lynn Brewer! Lynn Brewer is the founder, editor-in-chief, and publisher for Cliterature Journal. She has written two novels, including the blasphemous She Bears a King, and she has learned that her least favorite thing to do during an existential crisis is to provide a brief bio. 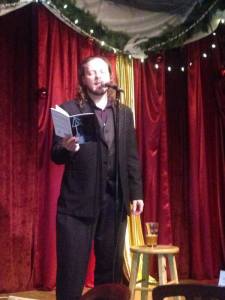 Featuring Nick Morris! Nick Morris has been many things: a grocery bagger, a knife salesman, an oil company stooge, and even one of those annoying people who asks if you have a minute for the environment. (The environment people never paid him, by the way.) Now he spends a lot of time talking about Batman and rock music under the auspices of higher education. When he can, he writes stories, and reads them every month at the F-Bomb Reading Series. If you look at just the right time, you can probably catch him singing along to the radio in his car.