Host Brian Dickson! Brian was born in the land of Pancho’s and Chico’s Tacos.  Fed a steady diet of Kraft cheese and “Where’s the beef?” ads he grew skinny.  So skinny, in fact, the wind blew him off the porch during home room in seventh grade when he went to shut the door.  It took years to shed the nickname Flaco until he discovered burritos–no more light shells.  He is in constant search of smothered burritos with better chile than Christmas in New Mexico.  Finally, he has grown strong in the burrito era. 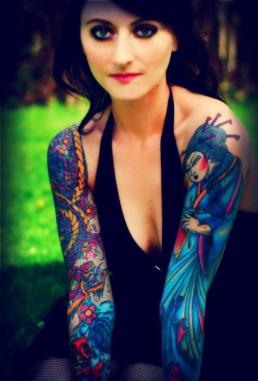 Featuring Hillary Leftwich! Hillary Leftwich grew up in Colorado Springs where Focus on the Family reigns supreme and Ted Haggard is currently hiding in his closet. Still. She survived Christian school where brainwashed fanatical classmates failed to save her soul and forced her to play Satan in the school play. Her English teacher accused her of practicing witchcraft and playing Dungeons and Dragons during lunch when really all she was doing was listening to The Melvins and writing strange stories that made her classmates feel “weird.” She later won the Colorado Young Writers Award and felt vindicated.