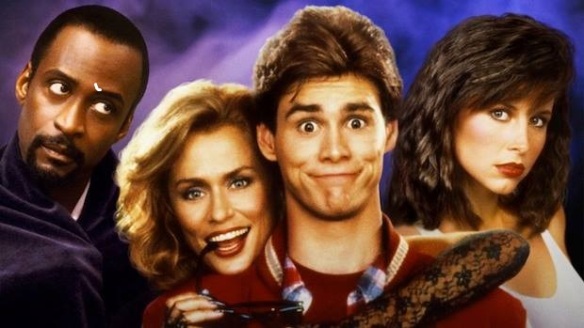 From Host David Atkinson:Once Bitten at the Fbomb: It’s been thirty years since Jim Carrey first brought us the magic of vampire T&A 80s comedy (as well as the pull of attractive older women on strapping young men). Well, actually thirty-one now…but last October we celebrated Back to the Future so Jim had to wait a year.

Regardless, it’s time to recognize in true Fbomb fashion. By that we mean everyone should dress in non-vampire costumes and congratulate each other on their vampire costumes, to which the complimented should respond: “I’m not wearing a costume!” Bizarro authors Danger Slater, Eirik Gumeny, and Karl Fischer will be traveling in from Portland, Albuquerque, and Boulder, respectively, to help us commemorate the occasion with the seriousness and decorum it sincerely deserves, and to help us award cool prizes for the three best non-vampire costumes.

Host David Atkinson! David S. Atkinson! David S. Atkinson is the author of “Not Quite so Stories” (Literary Wanderlust), “The Garden of Good and Evil Pancakes” (2015 National Indie Excellence Awards finalist in humor), and “Bones Buried in the Dirt” (2014 Next Generation Indie Book Awards finalist, First Novel <80K). His writing appears in “Bartleby Snopes,” “Grey Sparrow Journal,” “Atticus Review,” and others. His writing website is http:

/davidsatkinsonwriting.com/ and he spends his non-literary time working as a patent attorney in Denver. 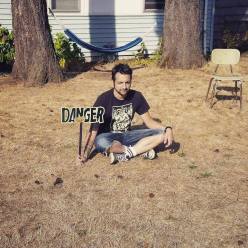 /most flammable writer! He writes with a lot of exclamation points! He is your favorite writer! You love him! Danger is the author of Love Me, I Will Rot Without You, Puppet Skin, and more. He is well known throughout the Bizarro Fiction scene and is generally considered a menace by people who frown a lot and have respectable jobs. Check out The Danger Show at http://dangerslater.blogspot.com/, unless you want to admit that the communists in the French government have already gotten to you. 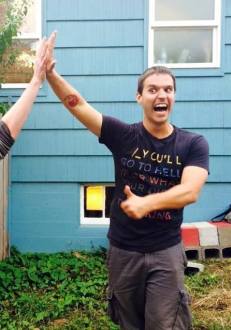 Featuring Karl Fischer! Karl Fischer is a writer and crazy person living in Colorado with his wife and their two fat dog children. He is the author of Towers (Eraserhead Press) and is part of the New Bizarro Author Series. He likes bad movies, fantastic movies, black coffee, and stories that make him cry.
*
Featuring Eirik Gumeny! Eirik Gumeny is the author of the Exponential Apocalypse series.

His short fiction can be found all over the internet and in various anthologies, and he has contributed to Cracked.com and Atlas Obscura. He is an avid fan of both Shakespeare and fart jokes. His website is egumeny.com.

2 thoughts on “Oct 18: “Once Bitten at the Fbomb” with Host David Atkinson and featuring Danger Slater, Karl Fischer, and Eirik Gumeny!”