Host Nicholas B. Morris! Nick Morris has been many things: a grocery bagger, a knife salesman, an oil company stooge, and even one of those annoying people who asks if you have a minute for the environment. (The environment people never paid him, by the way.) Now he spends a lot of time talking about Batman and rock music under the auspices of higher education. When he can, he writes stories, and reads them every month at the F-Bomb Reading Series. If you look at just the right time, you can probably catch him singing along to the radio in his car. 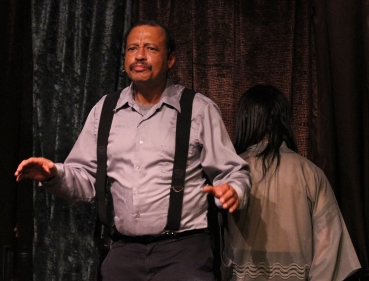 Featuring SETH! Writer, performance poet, musician and actor SETH is a veteran of Denver’s performance art scene. SETH was a driving force behind Open Rangers (1989-2000), a dynamic, multi-dimensional network of poets, musicians, actors and dancers. Open Rangers won several Best of Westwords for their pioneering efforts intermingling spoken word with other performance arts.. In 1993, SETH joined Jafrika, a critically-acclaimed performance art trio melding “provocative music, exquisite dance and poignant poetry.” The Rocky Mountain News listed Jafrika as among Denver’s finest cultural offerings. Currently, SETH hosts the weekly Jam before the Slam with the musical ensemble, Art Compost & the Word Mechanics, Sunday nights at the Mercury Café. A published short story writer, SETH recently completed his first novel, now in the hands of a literary agent. His poetry collection, A Black Odyssey is a diverse, vibrant, poetic memoir modeled on Homer’s ancient epic. For spare change, SETH teaches children to write and adults to perform. He can be visited at www.wagingart.com. His stated ambition in life is to earn enough money from his art to afford a last name.