Host Leah Rogin-Roper Leah Rogin-Roper’s essay, “Honk if You Love Real Snow,” was featured in Mountain Gazette’s Best of the West, along with western literary icons like Charles Bowden. Her flash fiction has been performed by Stories on Stage and The Buntport Theater Group. Fiction and nonfiction pieces have been recently published in The Denver Post, Serenity Magazine, Cliterature, and Deep South Review. She is currently cheating on flash fiction to focus on her fourth novel. Please keep her infidelity a secret. 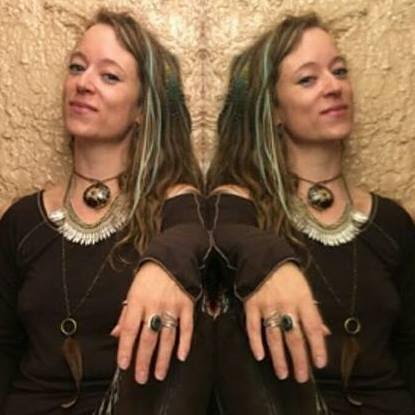 If you’d like the typical bio material for Stina French, go to paragraph 1 below.

If you’d like to hear what Gertrude Stein has to say about Stina, go to paragraph 2 below.

If you’d like to hear what really turns her on, go to paragraph 3 below.

Stina hails from North Carolina, and if you look closely, you can still see the welts from the Bible Belt.  After a stint in San Francisco immersed in burlesque, slam poetry, and festival culture, she joined the faculty of Red Rocks Community College in the Denver area, where she teaches erotic literature, graphic novels, Shakespeare, and even technical writing. She is working on her first novel, Mistress Immaculate’s Murder Most Mildew, and a collection of flash memoir pieces calledBobby Pin Vortex. The poetry arrives in dreams, and sets off on postcards to friends, tortured late-night texts to exes, hopeful early morning texts to potential exes, and post-it notes woefully bereft of their sticky backing.  You can read snippets of her work and her insights on the domestic life of a polyamorous, kink-oriented mother, writer, and educator at http://mistressimmaculate.blogspot.com/.

The Southern Belle wants nothing so much as the opened door, except when she wants more than that and she knows how to get it.  Abroad, she can gather more into herself.  It will be squashed as soon as she returns South not fitting as it doesn’t in those big plantation rooms that have become doublewide trailer add-ons and track-lighting tract home step-down dens.  It will never really change down there, even if some of them burn their bras and ask for equal pay for the same work.  In their father’s houses, the women will still say Yes, Sir and fetch the dishes to the sink after dinner while the men go out on the porch and talk. Earl Pate, a cousin of the author’s on her father’s side, who lived with his mother and about 6 or 7 vicious hound dogs with nothing to do but eviscerate the author’s father’s Jack Russell terrier because now the farming’s dried up and Earl smokes and drinks and doesn’t run his dogs but runs his mother in the kitchen. She is old and sick with cancer now but it wouldn’t do to mess with their routine, his coming to the table dirty and drunk but performing his man role and her serving him food like the author will never eat again because she left that place and oh how she misses it but she don’t miss Earl and she don’t miss Southern men but for except for maybe their honey-slow drawl and strong working hands opening doors stretching wide their capable arms closing her in and oh no but she don’t really miss them.

Stina’s interests include playing dress up with friends while doing X-rated literary madlibs, renting wrecker balls to stupid fucking breathless wolves, unpinning butterflies at ecstatic-dance cabarets, and serving sweet tea on swinging bridges.  Oh, and that light in your eyes right now if any of that sounds like fun to you, too.